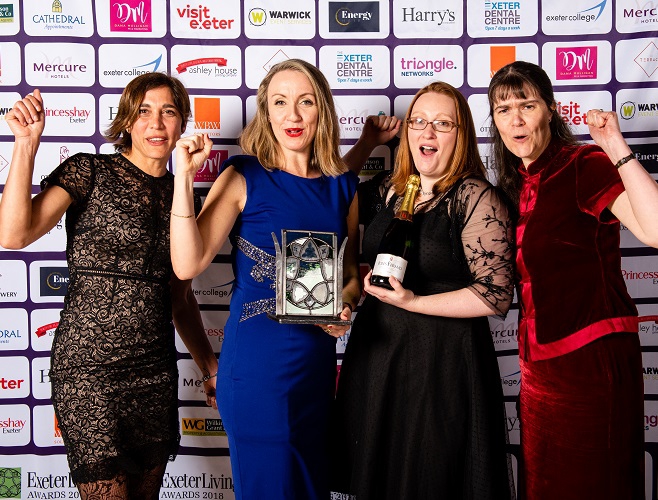 The award was presented to the team at a lavish award ceremony held at the University’s Great Hall amid a guest list of 400 businesspeople. Biosystems Technology won the award amongst six other strong finalists in the category including Exeter Science Park based, Care Systems and Innovation and Digital Specialists, Optix Solutions headed up by Exeter alumnus, Alastair Banks.
Speaking of the accolade, Olivia Champion, Founder and CEO of BST said: “We’re delighted to have won the Exeter Living Award for Technology and Innovation. Although BST is a new, small company, scientists from many of the major research organisations across Europe are buying our products. This has already resulted in some incredible new discoveries. For example, our insect larvae have been used in the discovery of a new antibiotic that has activity against tuberculosis. Not only are our larvae being used to make important scientific advances but their use also reduces the number of mammals that are experimented on. For example, the number of mammals used in one study was reduced by 80 per cent once our insect larvae were adopted as an alternative model. Winning the Exeter Living Award has been an encouragement to us as a team and it was a fun night out!”
The award winning, innovative company is going from strength to strength as their revenues have doubled in the last financial year in comparison to the previous year. They are reinvesting the money back into R&D to further develop their product.
BST are also conducting an Innovate UK funded R&D project in partnership with James Wakefield, Professor of Integrative Cellular Biology and his laboratory at the University to develop genetic tools for G.mellonella, the greater wax moth or honeycomb moth.
The Exeter Living Awards now in their third year celebrate the very best of Exeter. The next event will take place in April 2019.