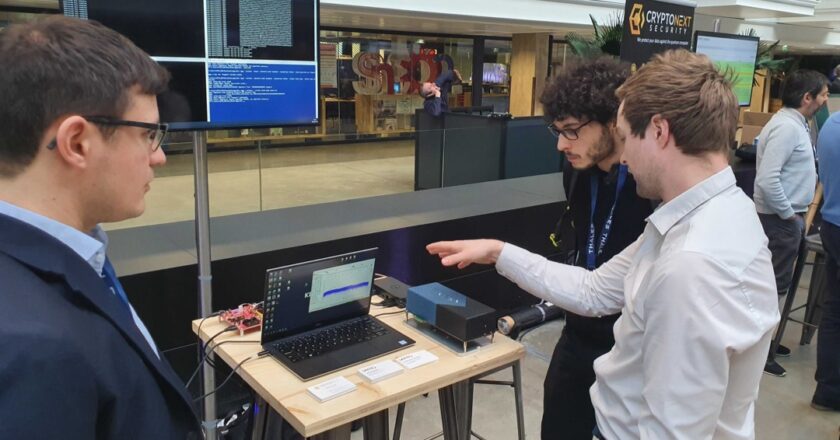 KETS is pioneering quantum encryption on a chip, to protect valuable information sent through our telecommunications networks against cyber attacks that will increasingly use quantum computing resources to hack into our private information. Quantum computing is computing with quantum systems or quantum bits (qubits). It has the potential to do many types of computation faster and more efficiently than our current standard, classical computers. While quantum computers will offer great advancements in many areas, they will also create a massive problem for encryption algorithms since they are tailormade to solve the mathematics that underlies the convenient public key infrastructure algorithms we currently have in use. To combat this, KETS is developing new quantum-safe hardware to protect our information networks.

Winner of the University of Bristol’s New Enterprise Competition

£387k Innovate UK grant QDOS-Light to partner with Airbus, ID Quantique, and the Universities of Oxford and Bristol

£3.1m Pre-Series A funding round

“I first took part in SETsquared’s Researcher 2 Innovator programme, which gave me even more of the entrepreneurial bug than I’d had before. When I heard about ICURe I was determined to get a place on the programme, but it took me three rounds of applications to finally be successful. I’m nothing if not tenacious!”

“I had already built quantum cryptography systems back in Canada during my PhD – even starting a short-lived quantum start-up before realising we were using the wrong technology platform. When I finished I spotted the opportunity to learn how to combine my quantum crypto expertise with the Centre for Quantum Photonics’ expertise in integrated quantum photonic chips. Starting as a postdoc before moving to Lecturer, we demonstrated some of the world’s first chip-to-chip Quantum Key Distribution experiments. Having caught the entrepreneurial bug during my time at Waterloo and wanting to get the technology out into the real world solving key problems, ICURe was the perfect programme for me to do this.”

“We were also at the right place and time. Quantum technologies started to take off in the UK in 2013 with the government looking to invest in, and develop, a new quantum industry. I took this to heart, both in co-founding KETS Quantum Security, but also in helping to secure the funding for the Quantum Technology Enterprise Centre (QTEC) at the University of Bristol. Basically a quantum start-up incubator, QTEC has helped KETS and 27 other still active start-ups during its 5 year fun.”

“During the Market Validation stage of ICURe we spoke to over 63 potential customers. The feedback they gave us helped to hone our USP and forced us to be much more precise with what we were offering. As academics, it was new to us to be working in this commercial way, and we had to learn how to adapt to that mindset. Some of the contacts that we made during the programme are still relevant to us today. For example, Airbus was one of our first connections, and we are still working with them now.”

“Going into ICURe we knew we had the idea and a solution to the problem, but not the whole solution. ICURe forced us to look more holistically at our offering and recognise which pieces we were missing. We learnt how we could talk to businesses better and make sure our products were aligned to their needs.”

“Since starting up we have grown the team by filling the skills gap that we needed to be more commercial. Last year we hired a busines development manager, which has really helped us to intensify our commercial focus. In the early stages of starting a business like ours it’s difficult because you don’t have a product to sell – you’re selling the vision of the product and some of the bits and pieces you’ve developed so far. That can be quite nebulous for academics to grapple with. It’s a fine line starting the fly wheel moving – selling what you have and almost have in stages until you finally have a full product to sell.”

“Dr Claudio Marinelli joined our team all the way back in 2016 during ICURe as our Business Mentor and has been with us ever since. He’s now a Non-Executive Director of KETS serving on our Board. From the start he forced us to bring a much more regimented, commercial approach to KETS and helped us to see what we needed to do next. He himself had worked in a number of start-ups and was the former Open Innovation Director at Nokia and it was this experience he’s shared with us.”

“The previous year has been challenging for us of course, with COVID-19 impacting everyone. We were lucky in the sense that we weren’t quite selling yet, so it’s not like we suddenly had our order book disappear. But it did make fundraising and meeting investors more difficult. Additionally, ours is a deep technology that requires expensive equipment to develop for which we rent space at the University of Bristol. Understandably, this was interrupted during some of the Covid lockdowns.  But with adversity comes lateral thinking and we managed to set up a temporary lab in the boardroom of our of our friends at UnitDx, so we lost much less development time then we otherwise would have.”

“I’m incredibly proud of how far we have come. From a starting point of no commercial or product building experience, we are now delivering products and at the table with the likes of British Telecom and Airbus. Watch this space!”