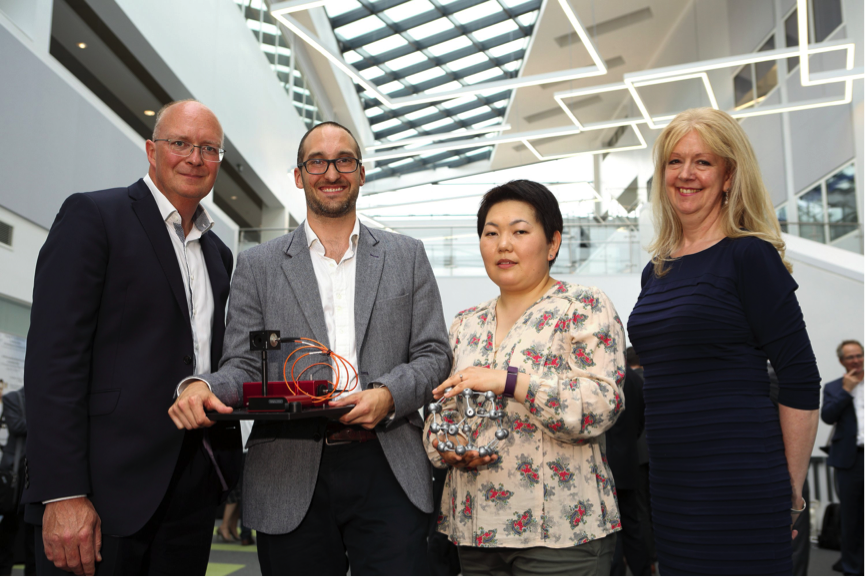 Thirty of the UK’s most exciting technology start-ups from the health, digital and mobile sectors showcased to big name corporates including Santander, Microsoft and GE Healthcare for the chance to have their product adopted by the business giants last week (22 June).

The event, the Open Innovation Showcase, was organised by SETsquared, the global number one university business incubation programme run by a partnership of the universities of Bath, Bristol, Exeter, Southampton and Surrey.

The aim of the Showcase is to broker mutually beneficial partnerships, with the corporates finding new technologies and products while the start-ups had the chance to seal deals with business giants that they would never normally be able to access.

The showcase builds on the Open Innovation Programme which, over the last year, has successfully presented selected SETsquared member companies to corporates including Sony, Huawei and Schlumberger and has further such presentations scheduled later this year with Italy’s number one bank Intesa Sanpaolo and Ford. Through these meetings, corporates are offered unprecedented access to a diverse range of innovation from SETsquared member companies.

As well as exhibiting, the start-ups had the chance to pitch for five minutes each, to over 200 registered delegates, to explain how their technology could feed into the corporates’ own product and services, increase their speed to market with new innovations or help streamline internal processes and systems.

The results also provide a boost for the economy as big corporates get value straight out of university research bases and bring products and technologies to market faster.

Delegates at the innovation showcase were invited to vote throughout the day for their favourite pitch, and the event culminated in a presentation where prizes were handed out for the following categories:

Simon Bond, Innovation Director at SETsquared, said: “The Open Innovation Showcase has always been a vital event for both corporates and start-ups, and this year was no different. We’re proud to have brought the cream of the crop of health, digital and mobile innovators to the showcase for 2016 and I have no doubts that the corporates who attended will be following up technologies worth adopting into their business.

“It’s no surprise that we saw such a high calibre of corporates at the event. SETsquared combines the research strengths of five incredibly successful universities and has a track record for developing the companies that are producing some of the most promising innovation in the South of England.”

Raya Yunakova, a start-up programme manager at Microsoft, worked with SETsquared to select the companies to pitch at the event. She said: “There was a really high standard of companies exhibiting at the Open Innovation Showcase. They’re already working like long-established a company, which is very reassuring to see – and it’s great to see them pursuing their goals. To pick the companies, we judged each one based on its own merits as well as digging into what they do, why they do it and who’s on the team.”

Mark Briggs, research manager at GE Healthcare attended the showcase event and said: “Every time I visit a SETsquared innovation showcase I’ve been impressed and this event was worth the trip as always. I’m very interested in a couple of the companies who pitched and will be making internal connections to follow up on what I’ve heard.”

Among the success stories so far is Bath SETsquared member Green Running, which is made up of experts in domestic energy monitoring and analysis. Last year the company secured an investment of £750k from Ignite, a social enterprise investment fund backed by Centrica, owners of British Gas.

Over the last 14 years SETsquared has helped more than 1,000 businesses raise over £1bn in investment, as well as contributing over £3.8bn in GVA (Gross Value Added) to the UK economy with £8.6bn GVA estimated over the next 10 years – figures that have contributed to it being named by UBI Gobal as the top university business incubator in the world.

Earlier in the year, SETsquared announced a record-breaking £90m had been raised in investment in 2015 by the start-ups it supports, with last year’s Open Innovation Showcase contributing towards this figure.