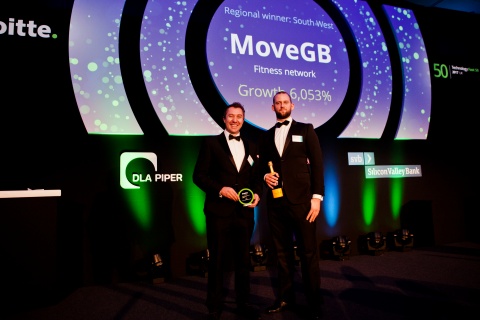 MoveGB has been officially accredited as the third fastest growing UK tech company in the 2017 Deloitte UK Technology Fast 50, having achieved a growth in revenue 6,053% percent over the last four years.

Based in Bath, MoveGB attributes its staggering growth to the determination to build a consumer centric fitness service, coupled with the huge variety of activities available on their platform.

MoveGB’s CEO, Alister Rollins said: “We’ve built a product that is more aligned to the way that consumers want to access fitness services. Giving people the freedom to choose where, when and how they want to exercise keeps them active for longer so we are increasing the value of exercise for both consumers and our partner operators.”

“It’s a real honour to be recognised by Deloitte for our unprecedented growth and achievements over the last 4 years. I want to thank the hard work and talent of the MoveGB team for making this happen alongside the support of organisations such as Deloitte, SETsquared and our investors.

“The 2017 Deloitte UK Technology Fast 50 shows that tremendous growth rates are still possible. With software sectors showing particular strength, they have had the greatest amount of entries in the past four years.”

“The Deloitte UK Technology Fast 50 awards are an opportunity for businesses to gain recognition for their successes and achievements over the last four years.”

“The 50 fastest growing UK technology companies, as ranked by Deloitte, generated around £1bn in total annual revenues in the year 2016/17, employing more than 9,000 people, including 1,800 in R&D alone. The Deloitte UK technology Fast 50 recorded an average four-year growth rate of 3,756 per cent.”

“The awards are an opportunity for businesses to gain recognition for their successes and achievements. This year’s ranking highlights the importance of being innovative, recruiting high-skilled talent and finding a niche product or service.”