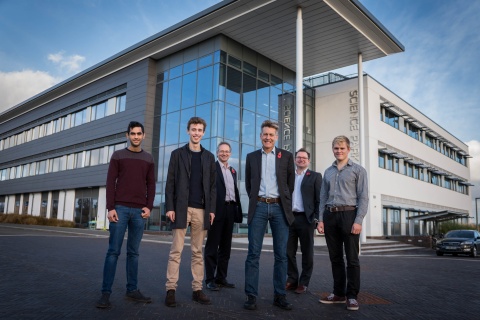 Exeter Science Park has played host to Ben Bradshaw MP to discuss the business support networks in Exeter that are putting the city on the map as a hub for fast-growth businesses.

Meeting companies at different stages of their lifecycle, from student entrepreneurs to start-ups and scale-ups, Mr Bradshaw was hosted by members of the SETsquared Exeter team.

The SETsquared Partnership is the enterprise collaboration between the universities of Bath, Bristol, Exeter, Southampton and Surrey. They support high tech start-up companies, provide student enterprise advice and enable academics to maximise the impact of their research.

Joe Pearce, Business Support Manager of SETsquared Exeter and Exeter Science Park, said: “Exeter and the greater Exeter area have a wide range of business support networks and initiatives that can help start-ups to grow into established organisations.

“SETsquared aims to nurture businesses from initial idea through to commercialisation, and to global organisations in some cases. Over the last 10 years, the initiative region-wide has supported over 1,000 companies, helping them to raise over £1 billion investment and finance.”

Student entrepreneur, Giacomo Poppi, the brains behind innovative tech company Alitica – an automated analytics system for restaurants, pubs and bars – was among those explaining his start-up to Exeter MP Mr Bradshaw, and told how he has been supported by SETsquared Exeter.

Joe added: “From the Innovation Centre at University of Exeter, through to Exeter Science Park, our city has the space, support and skills to produce highly successful companies, and through working with leaders like Mr Bradshaw, we can ensure the region continues to thrive.”

Other businesses who have been supported by SETsquared also spoke with Mr Bradshaw, including Care Systems and Innovation (CSI), which provides custom IT solutions to meet the growing demands of the care home market; Milkalyser, which has devised technology to detect the early stages of oestrus (sexual receptivity) in dairy cows; and bespoke mobile and web software firm seeDATA.

Mr Bradshaw said: “Exeter continues to outshine many other parts of the country economically – as in so many other ways.

“It has been fascinating to visit the Exeter Science Park and meet many of the people behind the success stories which are helping to drive our city forward.

“The work being done by SETsquared and others here nurturing fast-growth enterprises underlines the fact that Exeter is an amazing place to do business.”