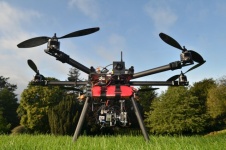 University of Bristol researchers have unveiled a large semi-autonomous drone called the ARM system which could be used to provide visual, thermal and radiation monitoring of radiation after a release of nuclear material.
The system was jointly funded by the Engineering and Physical Sciences Research Council and Sellafield Ltd and was developed in response to requirements for radiation monitoring in event of the release of radioactive materials.
An example of the potential applications are the nuclear incident at the Fukushima Daiichi power plant in March 2011, which was hit by a magnitude 9 earthquake and tsunami, to help detect radiation and prevent exposure to response crews.
The ensuing hydrogen explosion from the incident, resulting from runaway corrosion of the fuel cladding, caused a significant atmospheric release of radioactive material.  Most of this material was removed from the atmosphere by rainfall but contaminated a large area of land extending up to 200 km from the site. The inundation also disabled 23 of the 24 radiation monitoring stations surrounding the site, leaving disaster response teams effectively ‘blind’ to the ensuing radiation hazard.
Monitoring at and around the site was later performed by both government and non-government specialists in the hours and days following the event. Helicopter-based activities (including monitoring) were conducted at the risk of significant radiation exposure to the crews because a suitable alternative was not available.
Built by Dr Oliver Payton and Dr James Macfarlane, both members of Bristol’s Interface Analysis Centre (IAC) in the School of Physics, the ARM project is based around using unmanned aerial vehicles (UAV) with on-board microcomputers and sensors to provide an improved alternative to manned flights if such a disaster should ever occur again.
Dr Tom Scott, the project lead and Director of the Interface Analysis Centre in the University’s School of Physics, said: “By using light-weight and low-cost unmanned aerial vehicles systems, we can immediately and remotely determine the spread and intensity of radiation following any such event. The systems have sufficient in-built intelligence to deploy them following an incident and are effectively disposable if they become contaminated.”
Over the past six months, the Bristol team have successfully demonstrated the capability of the system in rain, snow and high winds to observers from Sellafield Ltd and the National Nuclear Laboratory. The proven and unrivalled sensitivity of the system for environmental radiation mapping has been demonstrated at radioactively contaminated sites in Southwest Romania as well as a naturally occurring anomaly site in Cornwall.
Dr Scott added: “Concurrently with project RISER, which is developing micro-unmanned aerial vehicles for the indoor mapping of radiation, we have developed an outdoors system that is now ready for commercial deployment.”
The University of Bristol is now working closely with the National Nuclear Laboratory to offer this technology in Japan as a tool for assisting with environmental surveying during the ongoing Fukushima clean-up operations and in the surround prefecture. The team are also working to develop UAV mapping and exploration algorithms for projects relating to the detection of buried explosives and depleted uranium ordinance.
View All