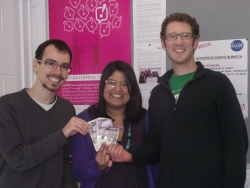 Would-be entrepreneurs from the universities of the SETsquared Partnership have recently been pitching their business ideas at Deloitte in London in a competition to encourage student enterprise.

The winners came from the Universities of Bath and Exeter, who had to present their business plans to a panel of experienced consultants from leading business advisory firm Deloitte. Of the 21 students who presented their plans, the judges awarded two prizes of £100 and two of £50. The winning business plans ranged from workshops for children to a customer-friendly chain of garages.

During the 5 minute pitch, the students had to clearly articulate their business idea, be passionate about their product and show some evidence that they had researched the potential market. They then had to take feedback from the panel.

“Presenting a well-argued business case is an essential skill for future employability and success,” said Siobain Hone, student enterprise co-ordinator at the University of Bath and the competition organiser.

“All the entrants showed great innovation and enthusiasm with their ideas. The judges were so impressed with the quality of the pitches that they increased the number of prizes from three to four.”

The winning entries were:

There will be another occasion to showcase and celebrate student enterprise activities across the SETsquared Partnership in June.