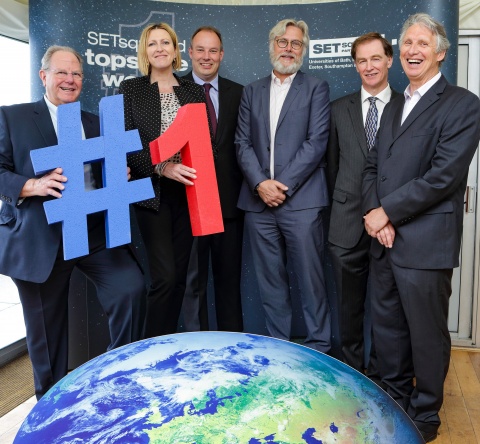 The University of Southampton, as part of the SETsquared Partnership, today launched a programme to enable some of the UK’s best tech scale-up companies become the sector giants of tomorrow. It is expected to generate over £25bn by 2030, create an additional 30,000 high-skilled jobs in the tech sector, and help improve Britain’s poor investment record in research and development.

SETsquared is the Global No 1 business incubator and findings from Warwick Economics show that SETsquared is already creating a cumulative GVA of £8.6bn for the UK from its support for tech startups.

“Since SETsquared started, we have helped over 3,500 businesses who have gone on to create over 20,000 jobs and raise £1.5bn in investment. Today we are launching our new scale-up programme which will help hundreds of SMEs over the coming years access the knowledge and resources of our five Universities to accelerate their innovation and growth – this will benefit the UK economy in a major way.”

“The SETsquared partnership has not only helped nurture and grow British technology businesses, but it has also contributed £8.6 billion to the UK economy, which is an incredible achievement.

“Through our modern Industrial Strategy, we’re calling on businesses to invest in the latest technology trends, and through our Sector Deals and Grand Challenges, we want the UK to be at the forefront of the technology revolution and make Britain fit for the future.”

The scale-up programme tackles the issue of how to ensure more UK tech start-ups develop to become major forces in their field. Warwick Economics estimate technology scale-ups are likely to produce 42% more GVA than traditional scale-ups and generate 16% more jobs.

SETsquared’s new scale-up programme has been supported by £5m of government funding through Research England’s Connecting Capability Fund which will enable 240 of the most innovative scale-up companies to access support.

Ministers have committed to increasing productivity in the UK and increasing spending on Research & Development from 1.7% of GDP to 2.4% to tackle these economic challenges. The UK currently ranks 22nd in a list of OECD developed countries.

Commenting on the impact that SETsquared’s member companies have on R&D, Don Spalinger added:

“With the UK’s ‘R&D gap’, we want to show parliamentarians how SETsquared can drive innovation in the UK. Utilising our proven track record of supporting early stage tech companies to raise investment and building R&D partnerships with the Universities we can support these SMEs to become successful enterprises as they grow into global leaders in their industrial sectors.”

“Kelda has gone from strength to strength and we have a highly ambitious growth plan. The support we have received from SETsquared has been invaluable because it has enabled us to develop our technology and scale our business. We’ve found new customers and raised investment as a result of SETsquared’s expert mentoring and guidance.”

Over 20 member companies from SETsquared were on hand to engage with parliamentarians and tell them about the challenges of starting or scaling a tech business in the UK.