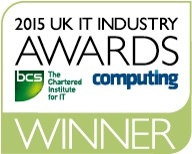 SETsquared Bath member Zynstra, has won the 2015 UK IT Industry Award for Infrastructure Innovation of the Year.

To be recognised as leaders in innovation by Computing and BCS, The Chartered Institute for IT, marks a real milestone in the development of hybrid cloud, and their mission to make IT a source of competitive advantage for SMEs.

The awards focus on the contribution of individuals, projects, organisations and technologies that have excelled in the use, development and deployment of IT in the past 12 months. The Infrastructure Innovation of the Year award is given to innovative new products or services that have delivered measurable benefit for customers. Zynstra was up against nine other companies, we want to congratulate them, and all the other winners and nominees. The full list of winners is here.

Zynstra won the award for their ability to deliver measurable customer benefits and challenge the status quo by reinventing the way organisations buy and manage their IT infrastructure. Customers have seen improved efficiencies (reducing an IT team’s admin burden by over 90%), enabling the release of IT resources within the customers’ business to focus on strategic elements rather than just keeping the lights on.

As industry analyst Dale Vile of Freeform Dynamics puts it:
“By bringing together the best of cloud with the best of on-premises IT, Hybrid IT-as-a-Service presents a third option that could be a better fit for your shorter and longer term needs. Your IT environment becomes simpler and easier to manage, while your business benefits from a stronger and more flexible platform for growth and development, and your capital budget doesn’t get hit every three to five years.”

Zynstra also have their fingers crossed for their nominations at the CRN Channel Awards, in the Cloud Services Vendor of the Year category (announced Thursday 19th November) and the TechCities Award for Bristol & Bath (announced on Thursday 26th November).